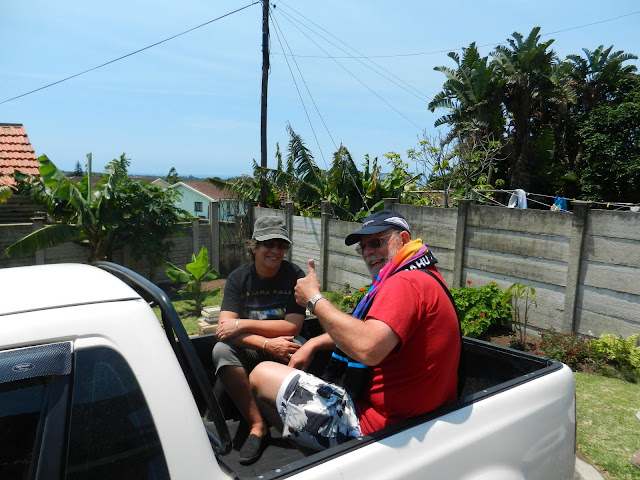 Guy went back to work today but he still has not fully recovered and I am very very concerned about his well-being.

Guy collected Dad from Pietermaritzburg on Sunday 6th of November by himself as Dad had a bit of baggage. Dad will be staying with us for a month. Guy usually takes Dad in for a month at a time twice a year and I really appreciate this. I was very surprised to see just how fit my Dad actually is; he does 50 pull-ups a day using his fingertips on the door architrave, 200 sit-ups and 50 press-ups.

We had a very emotional reunion when Guy arrived back at the house with Dad. We Last saw Dad and Mom in 1987 and unfortunately Mom passed away in 2003 so I never did get to see her again (not even a photo of either of them until now). Almost immediately Dad had the mouthorgan and guitar out and started playing the old tunes that brought back a flood of memories from my childhood. Dad played Mom's favourites which took me back to the old days when Dad would come home and sit on the verandah at about 4;30 pm playing while Mom occasionally sang and all the neighbours would come out to listen - my earliest memories of this are from about age 7. One of my fondest memories is from age 12 when my Mom's brother Joe and his family (wife Jill, Son's Allan & Michael, daughters Gail & Patricia),  lived with us in the old 1910 - Marula Avenue Hotel. Uncle Joe and my Mom both had fantastic voices and they got together one afternoon and started singing together as Dad played - this was very rare and it was the most magical evening of my youth as both families were all together on the old red cement verandah, surrounded by whitewashed walls of the rondavels and annexes that made up this 14 bedroom hotel under an old red iron roof.

I haven't been much good company for my little Bonnie Ronnie as I have been going through photo's and video footage for the most part as most of these South African relatives have passed on and I have not seen any of these photo's and video's - terrible as it sounds some I had not seen since the 70's (not even a photo) so I'm madly copying as much as I can for my children and I have something for you too cousin Chriselda but you will need to be patient (and I know you will be lovely lady).

Guy took Ronnie, Dad and I down the coast last week and we inspected a number of beaches, went for a swim in the ocean (I swam while Ronnie paddled and Dad and Guy looked after our gear). Ronnie and I had an absolute ball and especially enjoyed ridding on the back of the bakkie as we had when we were kids. Dad has a fondness for plain soft serve (vanilla ice-cream cones) so we stopped frequently to spoil him a little. We finally wound up in Ramsgate at a rather famous watering hole called Pistols Saloon. We ordered steak egg and chips with a few round's of ale. The menu comes in the form of wanted posters in a local rag while the meals are served up in frying pans instead of plates. To top off the meal we had the privilege of being joined by one of the pet donkeys in the pub where we had it eating carrots from our hands. Then we enjoyed a ride home in the warm rain on the back of the bakkie - bliss!