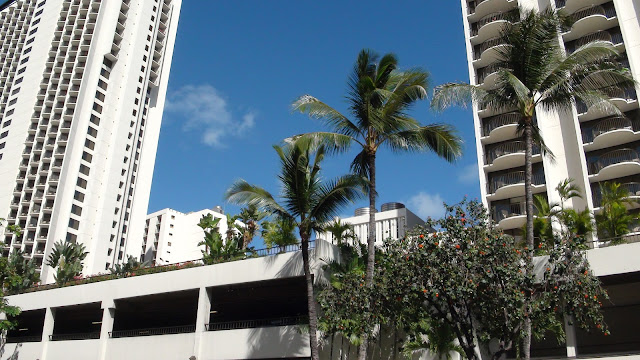 I have to say I was truly shocked on arrival at Honolulu International Airport after the layout of Auckland and Brisbane's Duty free shops, foreign currency exchange booths, help desks and the like. We were ushered down what I thought to be back stairs (no elevators, escalators or travilators here) straight to customs - we had been pre-warned that U.S. Customs will not tolerate mistakes on their declaration forms. We actually found them (U.S. Customs officials) to be quite polite and accommodating. Anyway after customs we were directed through a doorway which I expected to be the Arrivals section of the airport (indoors with shops , car hire booths etc.) but we were actually outdoors (under cover) in the pick-up area. We were greeted Hawaiian style with the necklace of flowers and Aloha's, really nice touch by the hotel staff.

The drive to the hotel was by shuttle bus (full size luxury bus) with only 2 passengers, Ronnie and I - really weird being on an empty bus. The drive took us through some of the suburbs and slums which was a little depressing as the 2 predominant colours seem to be brown (Tan) and grey. The people however are very colourful, fantastic and happy... they love to talk so I'm right at home here!

The Marriott Hotel, what can I say - has the same name as my grandmother on my mother's side so of course it's good... Seriously though someone should have warned us about the size of the place, it took half an hour to find reception (I lost a few kilo's there lugging our luggage about).Two towers, each 20 floors 2000 suites. the first 3 levels are shops, activities, bars, pools etc. 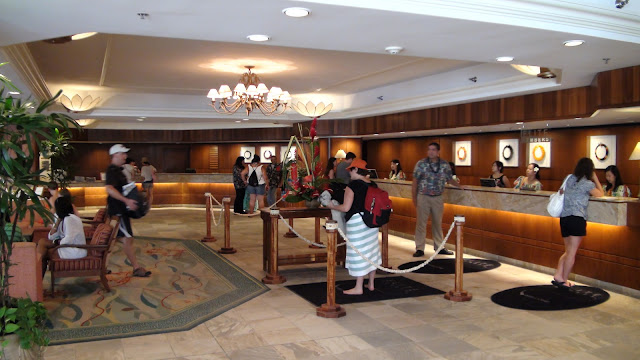 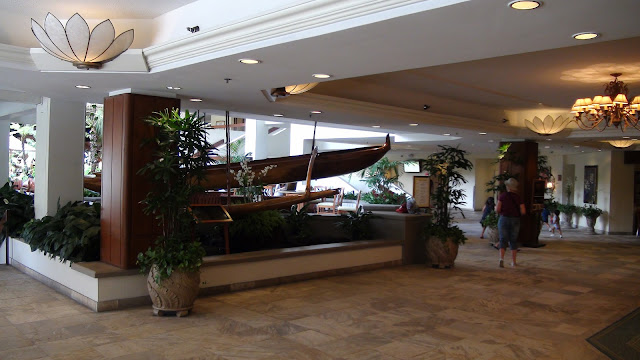 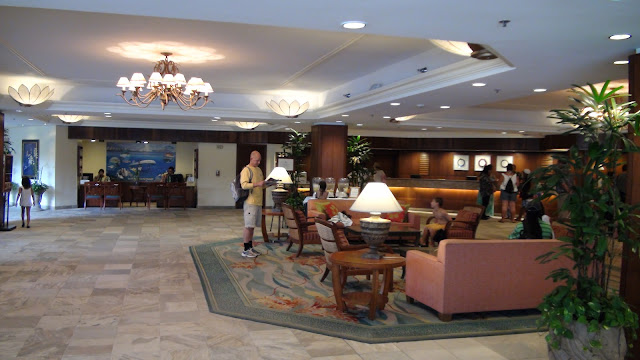 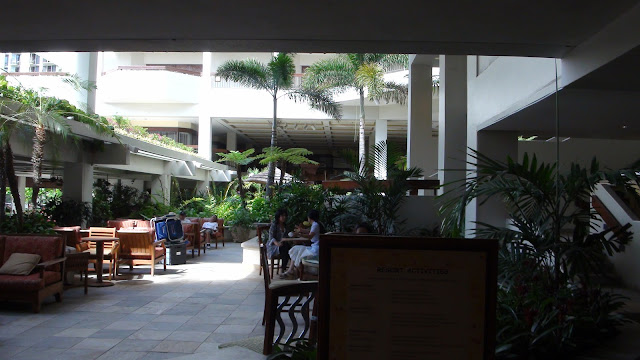 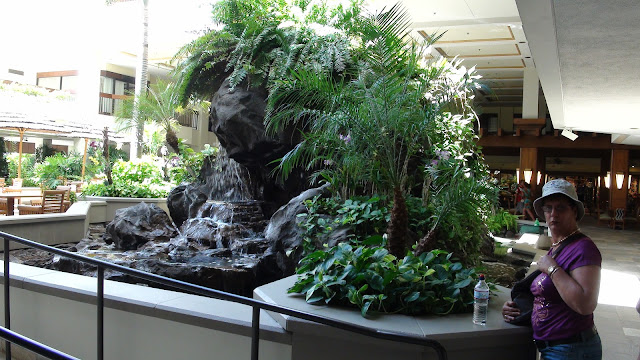 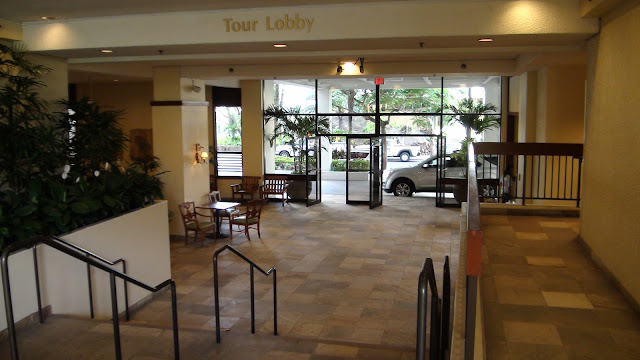 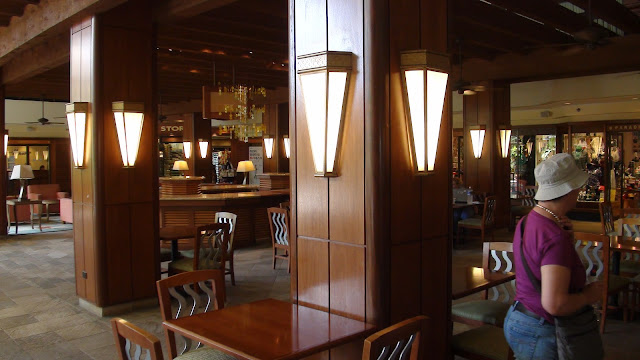 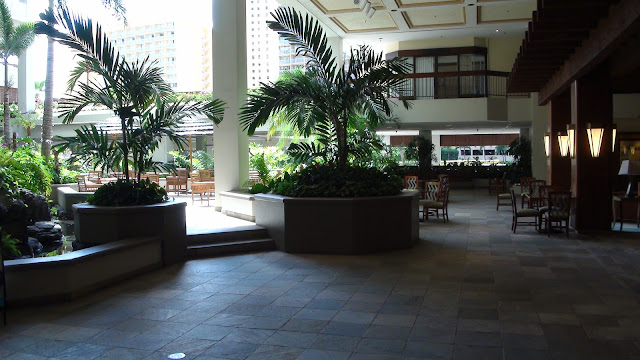 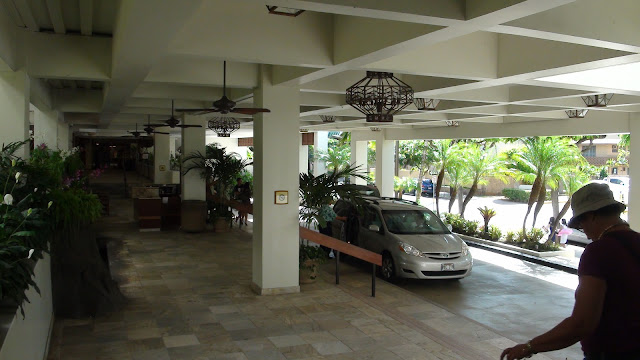 First thing on the agenda was catch up on some sleep but Check-in is only after 15:00 (time was 07:30) so we went exploring on foot. Soon after setting out we decided to grab some water as the humidity was knocking us about after Auckland. Taking a minute to have a seat and a swig Ronnie was christened by an old traditional Hawaiian custom called (and I quote) "The price of shade" as one of our feathered hosts bid her welcome with a rather substantial deposit... funniest thing you ever saw.. Ronnie doing a combination Watusi and duck dance while splashing herself with ice cold water... sorry I was no help at all, having almost lost control of my bladder while laughing like a lunatic, much to the amusement of the locals.


Many wonderful places but we came across one place at the Waikiki Town Centre called the International Marketplace on Kuhio Avenue - AWESOME and my favourite place at the market "The Tree-house Cafe" - RIPPER, great food, especially the seafood salad (Ronnie's choice). Best of all was the atmosphere, we both felt that we could stay there forever, only 2 other couples in there at the same time as us so it really was relaxing, good Hawaiian music in the background... yeah, I could certainly get used to this! 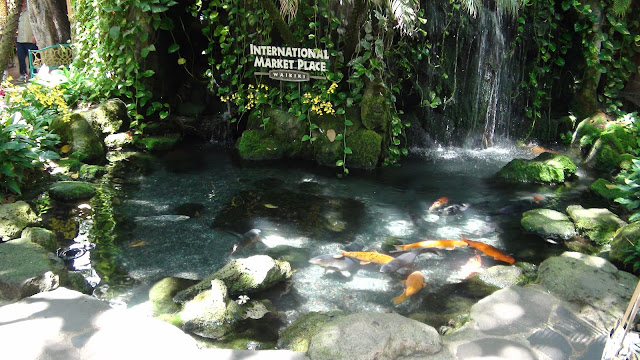 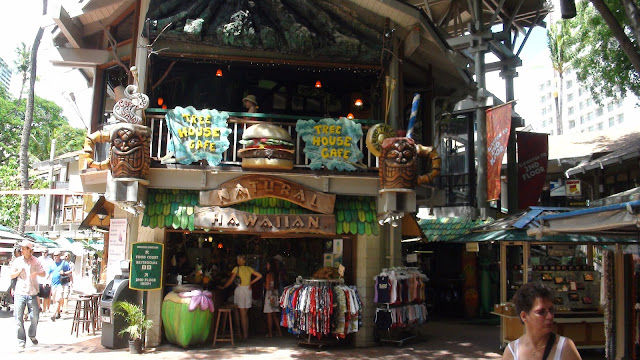 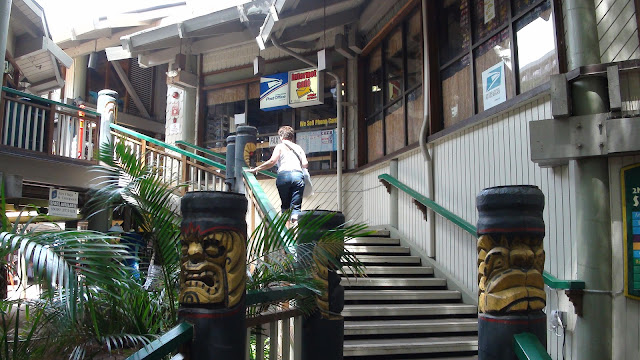 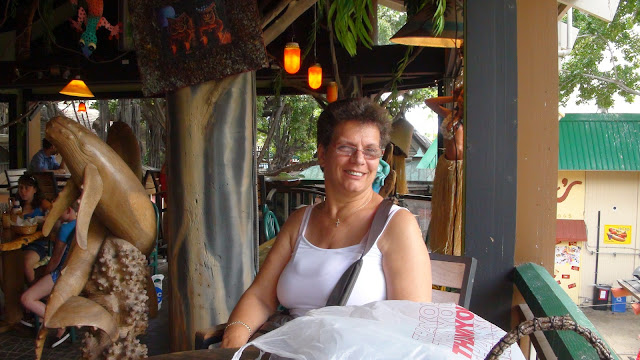 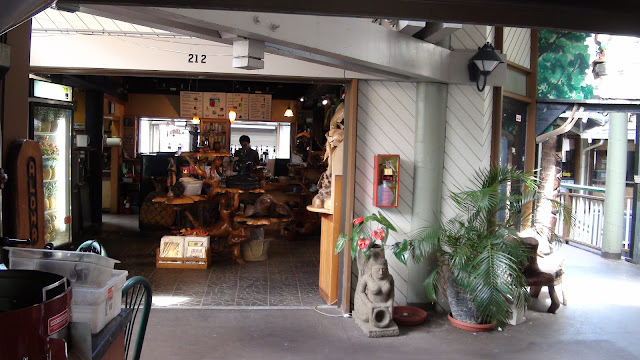 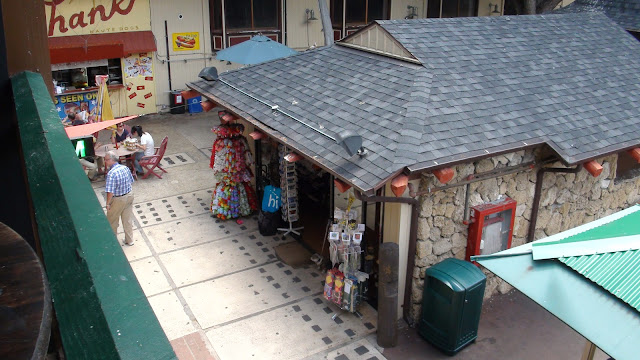 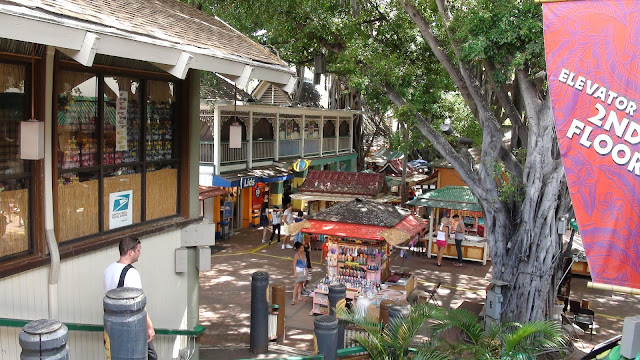 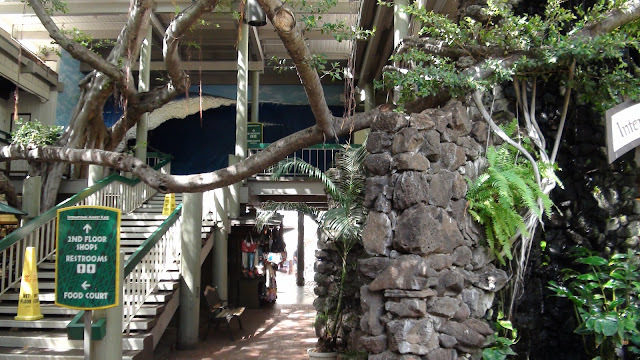 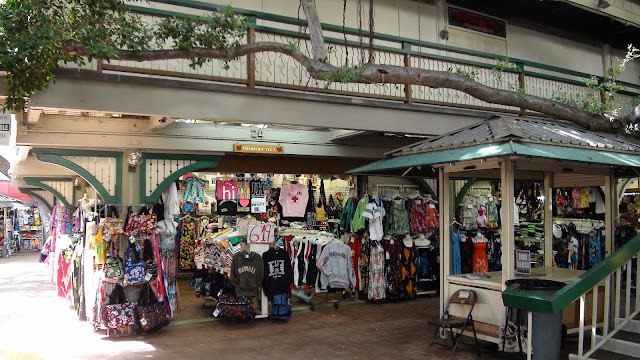 We also visited the Ala Moana shopping centre, seriously big and the thing that surprised me is the fascination American's have with food... don't go there if you are on a diet, your battle is lost before you walk through the door with a food court as big as Bunnings.

Funny the things you notice, Auckland - a lot of young (under 30) joggers, everyone looks trim taught and terrific -Honolulu it's mainly the over 30's who are into the fitness regime with quite a few over 50's looking damn fine! 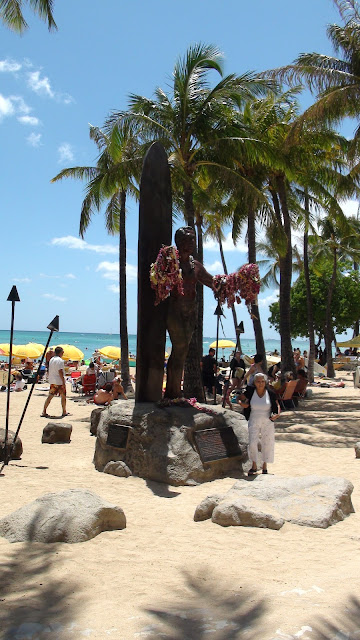 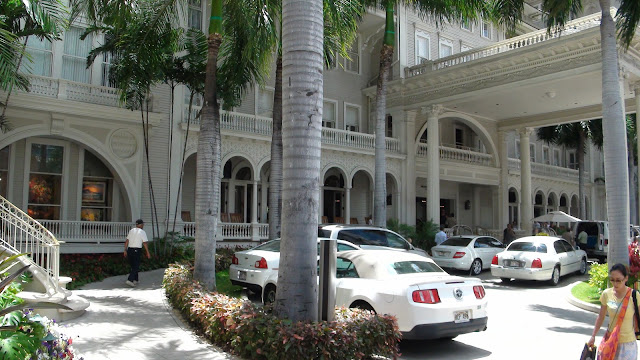 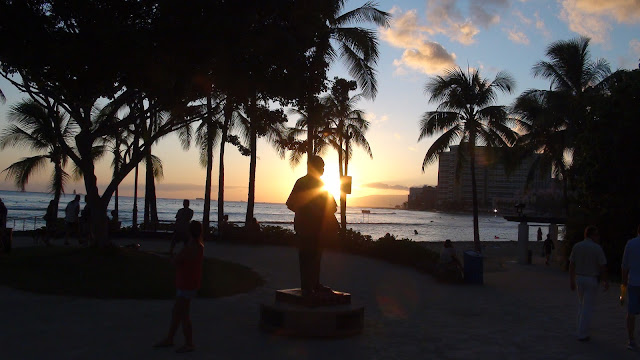 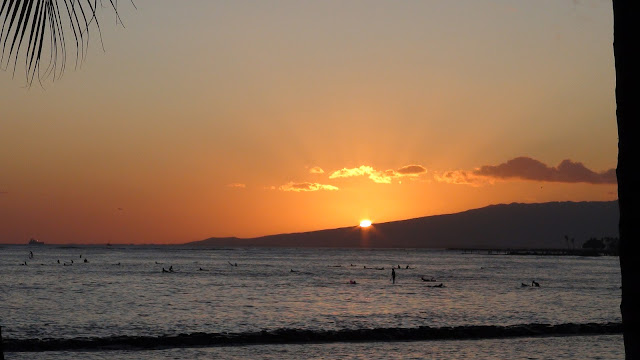 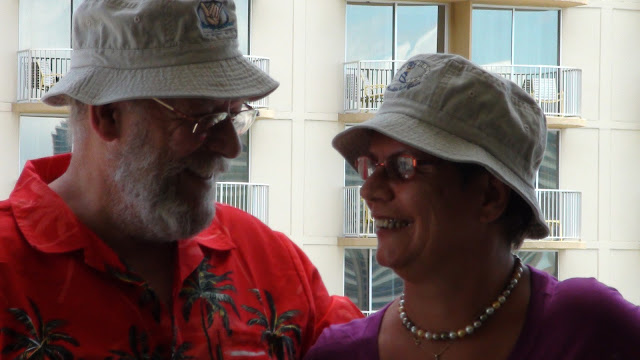 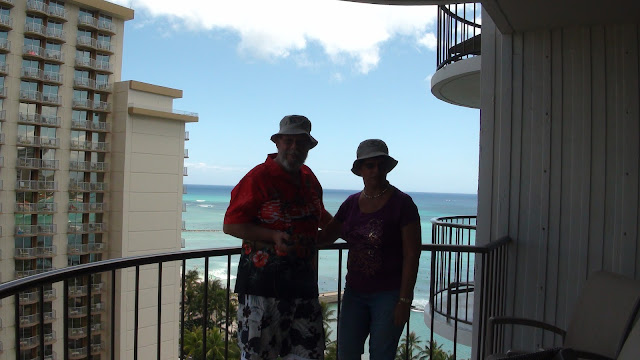 Today was pretty much the same as yesterday but with new experiences and new places. Met and spoke to some very interesting characters - but that's for another time. Went swimming in the ocean for the first time since the late 80's early 90's can't believe how time has just slipped away. If memory serves me right it was body surfing with Cousin Gary on the Gold Coast and the weather was being a little nasty making it a little more exciting. Well I had a good old splash about in the kiddies tide pool today... did us proud Gaza...Oohhh! how things have changed:)
Posted by Peter at 18:54:00